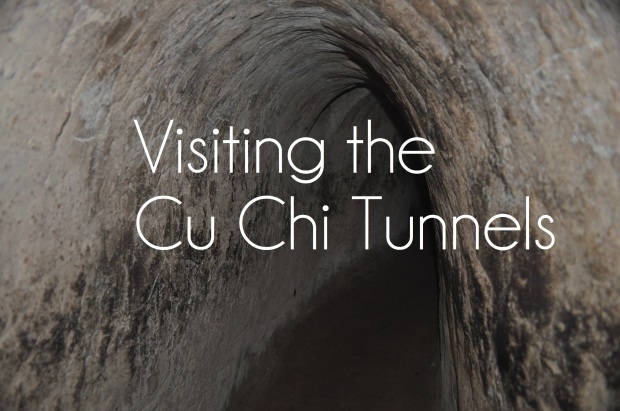 There are many tours to choose from, but after reading about the long bus ride and the huge crowds of people we chose to get there by boat. It’s not only a lot quicker but you arrive before the crowds. We chose Les Rives tour company and while it was more expensive than most I’d say it was well worth it.

They picked us up in Ho Chi Minh City and drove us to the boat. The boat was open air and very clean. When we took off up the river they served us fruit and drinks. The ride was about an hour and a half and had much to see. It was interesting to see the small villages and the bustling bridges and ferries. I had one of those “this is why I travel” moments while looking at all the scenery around me.

When we arrived they had all the entrance passes squared away and we walked right in. The first thing they have you do is watch a low quality movie on a tiny screen. The movie did make us feel slightly uncomfortable as it was very anti-American and we realized we were the only Americans in our tour group. Once the movie was finished we were shown all the traps they used to kill Americans. Although frightening and sad it is a part of history. We were then shown a tank that the Vietnamese had captured. Everyone in the tour group took a picture with it. I had read on tripadvisor people mentioning how this made them(Americans) feel uncomfortable. I really didn’t get that until we were there. It was strange to watch people from different countries stand and smile in front of a tank from your home country that was captured and the people in it most likely killed.

Next we got to see the tunnels. They were tiny and I truly cannot imagine the horrors of living in them. Some Vietnamese even lived in the for 20 years!! We had the opportunity to climb down inside and it was roasting hot and uncomfortable. The guide led us through the tunnels and we would go down steps and crawl through long hallways and we were never able to stand up straight. Just the short distance we climbed was exhausting.

I was truly surprised at how emotional I was about a war I didn’t know much about and wasn’t alive for. For my own county and the soldiers who died, but also the Vietnamese who endured such hardships it was a sad place. I was not a fan of the opportunity you have to shoot guns. I felt these grounds were a sacred place many Vietnamese and Americans died for their country. It didn’t seem like a fun experience to be able to shoot the very guns that killed so many of them.

After the opportunity to shoot guns we got to see how rice paper was made, how the Vietnamese tire shoes were made, and try cassava which is what the Vietnamese ate in the tunnels.

Once we had finished walking the grounds we were taken to a little restaurant on the water as a part of the boat/tour package. We really enjoyed the meal and felt completely satisfied on the boat ride back.

Overall when visiting Ho Chi Minh City the tunnels are a must. They are an amazing architectural feat. Just be prepared to bring some tissues.